Speculation continues to surround the impending transfer activity out of L4 this summer. Boss David Moyes gave weight to this recently when he confirmed what most fans knew already that we have no money to buy new players, with the knock on effect being we are left vulnerable to other clubs picking off our best talent. Speculation has focused on our two midfielders, Jack Rodwell & Marouanne Fellaini. Whilst I retain the hope that we can keep these top young talents at the club, it is looking increasingly like one of them could be sacrificed. This article will take a look at the impact both players have had in the last 3 seasons and which is the most expendable asset and will look at the squad balance in general …..

A brief synopsis of the below table would say that Fellaini is a much more effective presser than Rodwell, making a successful tackle every 35 minutes – Rodwell takes nearly double the amount of time to win a challenge and has a lower tackle completion than the curly haired general. Rodwell is elegant on the ball and has a better passing completion than Fellaini. Crucially though, Fellaini has more incision to his passing in the final third, creating a goalscoring chance for a teammate every 92 mins, something which takes Rodwell significantly longer to do.

The below table is based on Premier League games only…….. 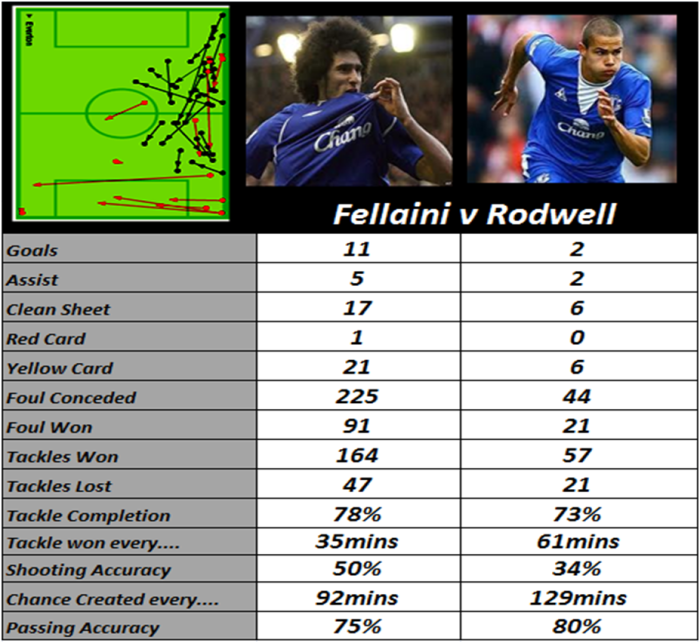 Both players are on comparable 5 year contracts for around £30,000, worth in the region of £8m over the duration of the deal. Rodwell is younger (19) and crucially he is English, a variable which in this country distorts transfer values massively… the transfer of the highly mediocre Nigel Reo Coker for £10m springs to mind. Rodwell is often compared to Rio Ferdinand during his formative years at WHU in terms of being a classy, ball playing defender, although this comparison is skewered by the fact that all of Rodwell’s displays in blue have been in midfield. Ferdinand made the move to Leeds at the age of 22 for £18.5m in 2000, then moved onto Man U for £30m 2 years later. The figure of £25m is mooted for Rodwell but I’d be surprised if somebody would fund this given his inability so far to add beef to the clear potential he possesses. Deals of £15m up front with add ons going up to £20m would in my view be more likely.

Fellaini’s contract only has 2 yeas left to run, expiring in summer 2013. After the £15m investment in him the club will be loathe to lose him at a loss. People mention Pienaar and the club allowing him to run down his contract, but this investment was just £2m and thus incomparable to the Big Belgian.  I would seriously question whether the current board would allow Fellaini to enter the last year of his deal with no contract signed and therefore I think they would listen to offers for him to guarantee they get a return on their investment. If this materialized I think we could command a deal worth in the region of £22-25m with the bulk of this paid up front.

The following charts are based on league and cup games each player has started over the last 3 seasons…with Fellaini having the edge in terms of % games won.

Rodwell has recently signed improved terms on a deal that runs up until 2015. Therefore there is no risk currently that he could walk away for a reduced fee. The risk with Rodwell though is that should  he fail to build on his reputation as has been the case this season  for another year, this could lead to any inflated fee being reduced.

The squad at the moment is very unbalanced. Central midfield is an area we are strong – this season Fellaini, Arteta, Rodwell, Heitinga, Neville and Osman have all played there and you also have Cahill who can play there and young Ross Barkley who will be ready later this year. It is a position we are top heavy in, whereas upfront we have just 3 strikers currently available – one is not competent for this division, one is still very much a work in progress and the other has fantastic ability but is injury prone and will be 33 when the new campaign kicks off.

If we could ship out Heitinga this summer it would bring in a decent fee from his sale, albeit not for a massive sum since his stock has dipped since his appearance in last year’s World Cup Final. Removing him from the wage bill would remove one of the clubs top earners -reported to be on £70k per week – which would potentially save the club £11m in wages from the remaining 3 years of this deal. We also have £35,000 per week from Yakubu which will be skimmed off the wage bill in the summer, plus a moderate fee for the Nigerian forward.

Should we cash in, it could give us the opportunity to bolster the forward line and bring more balance to the squad. Moyes will be pushing for the fees recouped to be ploughed back into his transfer kitty, with powerhouse 21 year old Venezuelan striker Rondon the #1 target. Moyes has visited Malaga to watch the man who has 12 La Liga goals to his name this term. Rondon has a 20m euro buy out clause in his contract, but crucially like with the Fellaini deal, would be available at a reasonable wage package and offer the potential for future sell on value.

Fellaini has played a significantly more vital role to the team and if you were to look at who would make the bigger impact next season, you would have to go with Fellaini. After what happened with Rooney, Lescott and Gosling, you don’t really expect loyalty from players nowadays, and conceivably both of these current players could be on the move in the coming years – therefore if we are looking at short term, I would say Fellaini is the best option if we can keep him.

Much has been made of the wage the pint sized schemer has been demanding and it looks as if the wage will top what we offered by £20k per week from the £50k that was on the table from us. Whilst his decision is by no means a surprise (if boyhood Blues like Jeffers & Rooney won’t stick around what chance a South African who probably hadn’t heard of Everton til he signed) it is sad that someone who has been pivotal in our evolution from  a hard working, organised team into one that plays more expansive, passing football is leaving to what will probably be a squad role at Spurs. 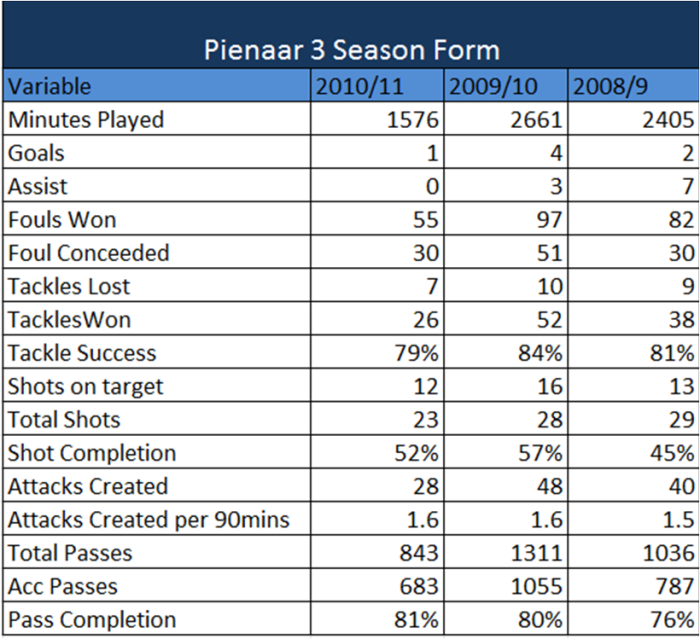 Pienaar could really play and his interplay with Baines has been our best attacking weapon for the last 3 seasons. Even though he hasn’t contributed one direct assist this season the movement he makes inside to create the space for Baines to bomb up the touchline to get his crosses in has led to Baines accruing 7 assists this campaign. He is a team player who had the rare combination of sublime skill matched with great determination and application, even during the latter days of his Everton career . The only thing you could perhaps level against him is that there is a lack of end product and he could be questioned positionally from a defensive point of view as opposition managers have exploited to our detriment.

The stats show that with him in the team in Premier League games we have a win rate of 37% whilst without him the figure is 40%, so I wouldn’t say he is as integral to us as, say Mikel Arteta whose win rate in the team is 44% compared to 37% when he isn’t featuring.

its going to be very hard to replace the South African especially given the poultry sums David Moyes will be given from Kenwright, probably a couple of quid and some complimentary tickets to a West End show will be the extent of our transfer wedge leaving us lagging behind even the likes of Stoke noawadays. To replace him in the current market you are looking up to £10m. Players linked so far include Eagles at Burnley which is hopefully just speculation. If we want to keep our left sided strategy we will need someone who can tuck in and play inside, not someone who will hug the touchline and look to get crosses into the box. We have Billy of course and he is surely going to be given the nod until the end of the season at least.

In conclusion, it’s going to be very hard to replace the South African midfielder. He gave us some great memories and was a joy to watch, but no player is bigger than the club and we need to move on quickly. 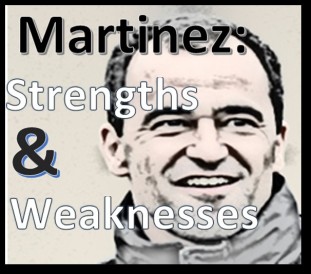