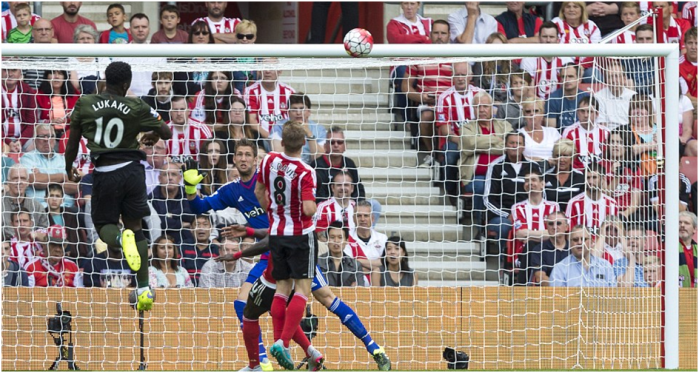 After the doom and gloom of last week and the ensuing hysteria this week, Everton brushed aside their troubles to deliver a pretty much faultless spanking of Southampton.

Roberto Martinez made 1 change from last week’s line-up, with Arouna Kone coming in for Kevin Mirallas. On first inspection Kone was deployed as a right-sided forward in a multi layered 4-1-2-2-1 type setup. Yep, that formation probably doesn’t exist. Setup wise, Barry was deployed more centrally in front of Stones & Jagielka, McCarthy was towards his right with Cleverley hugging the touch-line a bit more on the left. In front of them Barkley (inside left) and Kone (inside right) played as narrow support behind Lukaku. Martinez was banging on about lines of passing on MNF this week, so you get the picture.

The Saints made one change,  with Shane Long attempting to break the most goals scored against Everton for different mediocre clubs record, from the left of midfield in a 4-2-3-1 ish setup.

One of the most obvious tweaks to our approach based on the evidence of the opening couple of games of the new season is how we’ve gone from back to front a lot more quickly than we did on average last season. Indeed, we’ve attempted more long passes than any side in the league apart from West Ham, and made the most accurate (66).

The usual tactic when Howard gets the ball is for the centre backs to split and for Barry to come in between and receive the ball to link play to the midfield/forwards. Yesterday this rarely happened with Howard opting to go direct, straight into Lukaku (albeit  with haphazard results). The ‘Big Belgian’ would then look to link play with Barkley  – which he did brilliantly – with the Lukaku-Barkley pass  our most frequent of the game.

For the first half this was the main outball, with Barkley then able to make short, forward passes into the feet of midfield runners Cleverley and McCarthy. He did this superbly, albeit the spaces between Southampton’s defensive and midfield lines were wider than Sammy Lee’s head.

Martinez is often criticised for advocating sterile possession in our own half, but here our play was predominately in the danger zones, and we posed a genuine threat every time we broke forward in numbers.

Barkley in particular was in the mood, and had more touches and passes than anyone on the pitch, and crucially more of his passes came in the Saints half than any other Everton player. He was also involved in both our first half goals, both of which, like him, were ace.

The opening gambit came from a goal straight out of the mythical counter attacking manual. Southampton will probably reflect that they should have had 2 rather than just the 1 man on the edge of our box when their corner comes in, but what ensued was sublime from Everton. As the ball broke loose, Barkley marauded, fed Kone down the right, and the Ivorian’s sublime, pin point cross was deftly despatched by the head of Lukaku. The sight of Cleverley and Galloway both busting a gut to get on the end of Kone’s cross was testament to the numbers and desire we put into such transitions of play.

After Barkley then missed a sitter after being put in from Lukaku, the resurgent youth then returned the favour by expertly slotting in the Belgian, whose crisp shot was swept into the net first time. Lukaku actually won the ball back at the start of this move in his own half, and it was typical of the pressure game we were sticking up the Saints at this point of the game.

The term unplayable is banded about haphazardly, usually by morons like Robbie Savage, but in this instance it was on the money;  Lukaku’s pace and power to gallop into the wide meadow of Southampton’s defence, allied to some ruthless finishing, was a joy to watch.

Southampton changed things at half time with Romeu coming on for Tadic, presumably to get a bit more control in the  middle of the park where the battle had been emphatically lost. Romeu was tasked with adding some bite and retention to the centre of midfield alongside Wanyama with Davis a bit more advanced. Mane moved to the right and Long swapped over to the left.

The result gave Southampton more control in the middle of the park, but our defensive operation was so resolute that it was rendered futile.

Martinez re-shuffled the midfield and went to a  4-3-1-2 after the break with Cleverley forming part of a flatter midfield 3 (on the right side) with Barry left and McCarthy central meaning it was a 3v3 in the centre of the park.

Barry covered the most distance for Everton for the second game on the spin.

With the middle ground compact, Saints were forced down our left flank and resorted to pumping in an avalanche of crosses (39) into our box. Whilst we dealt with such situations abjectly in the corresponding fixture last season, this time we held firm with the backline and Stones, or Chelsea target John Stones as he is now known, repelling the aerial onslaught of groc-chic Pelle superbly.

With the game fizzling out somewhat due to this midfield stand-off, the superb Barkley was to have the final say with a wonderful right footed strike following good work from Lukaku and Coleman. The big question mark over Barkley last season was his poor yield little of assists / goals for someone playing at the sharp end, so to follow-up his goal last week with his first goal/assist combo in the same game was a real sign of progression.

The control of the game and counter attacking threat Everton carried in the first half was too much for Southampton, and likewise our rigidity and shape nullified our hosts and shut the game down after the break. The performance of Barkley was the most eye-catching, and his link up with Lukaku will give Evertonians a huge shot in the arm of what could be in store for the rest of the season. 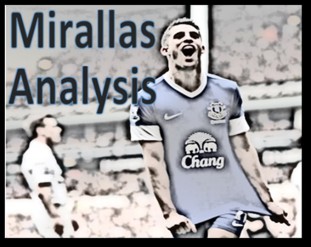 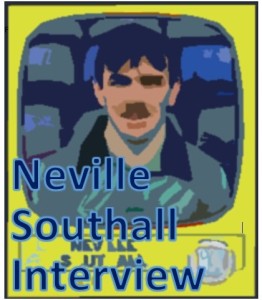